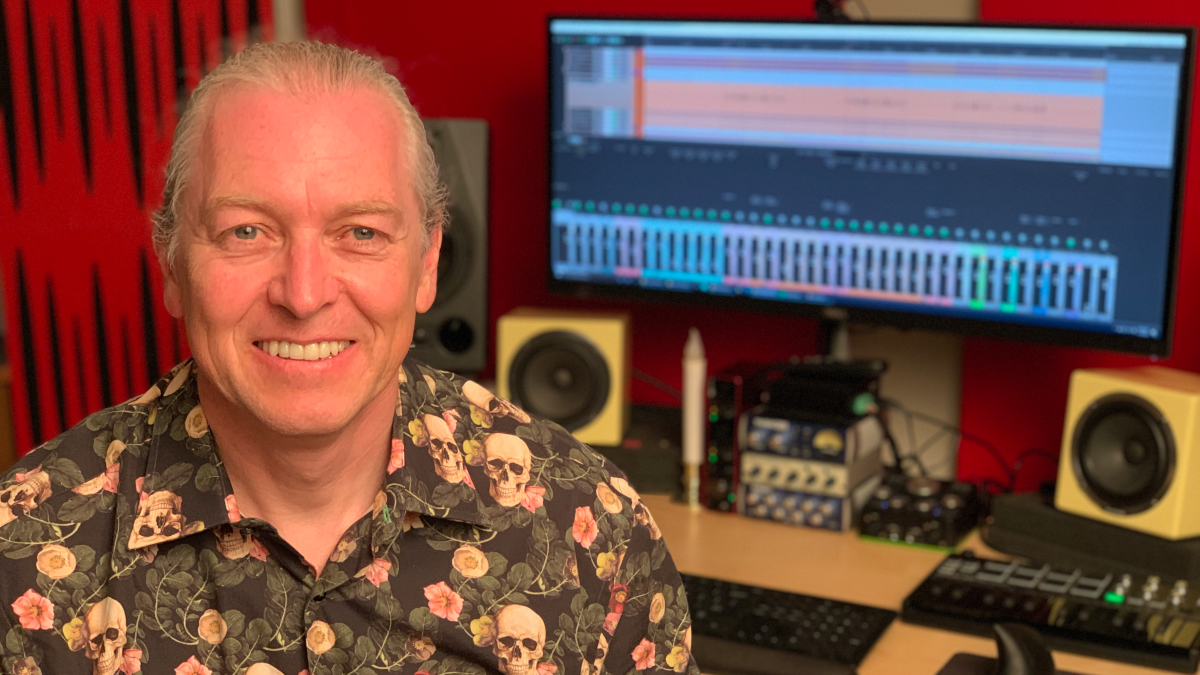 My name is Mark Milbourne, I was born and raised in a little town called Mooroolbark in Australia.  In 2001 I moved to San Francisco, California.  I play the guitar, mix both live and in the studio.  I also run a software company, CloudyCosts

I played in many bands in Australia, doing my first paying gig at age 18.  I had success playing in cover bands throughout the 90s, performing in many venues around the east coast of Australia often to packed venues that would hold several thousand people (ah the good old days).  My original music never really took off.  In my off nights, I'd mix original bands at a local pub, for beer of course. I had no idea what I was doing but it was a start.

Graduating from RMIT in 1990 with a Computer Science degree. My day job was working as a Software Engineer, or back then a Computer Programmer.

In 2001 I was lured to work in the US for a big printer controller company. The itch was too great and I returned to playing live music here in the US, most notably playing in the band the Spazmatics.  I retired playing live about 10 years ago and focussed on live mixing and worked for a lot of corporate bands in the San Francisco bay area.

I built up a decent reputation in all the clubs and production companies and was starting to get work from them.  July 2009, I took a voluntary separation from the company I was working for and decided to pursue sound engineering fulltime as my main source of income.

Then Covid hit, and all gigs were cancelled.  So I used the lockdown time to hone my skills at mixing in the box.  Which is where I doubled down on doing daily exercises on SoundGym, reading books on mixing, watching videos, and best of all just mixing everything and anything I could get my hands on.

I'm a bit of a Jekyll and Hyde, I'm a Musician/Sound Engineer and a Software Engineer.  For most of my career, I've worked during the day writing code, while at night playing or mixing music.  Music definitely has dominated my life.

Often people I work with during the day had no idea what adventures music was taking me on.  And vice versa, most musicians, fans, the production crew etc didn't know that I work during the day writing code.  I definitely tried to keep the camps separate.  There were many times when I had to change at work and run off to do a lunchtime performance somewhere, only to return sweaty and exhausted to get the standard corporate eye rolls, for a perceived long lunch.

By far the Compressionist game.  This game has really taken my skills at hearing compression to a level I would not have thought possible.  Every time I play it I feel like I'm making some breakthrough.

I'd be remiss in saying the Mix Down Training room is awesome!  All the people in that room are great, they have helped me with mix feedback.  I'd say that group has made me grow as a mix engineer faster than I could have hoped for.  Having the Sunday deadline to grind out a mix every week really broke the apprehension on releasing my work.  Leigh has been choosing awesome songs to mix, I commend him on his diligence and awesomeness.

This was on one of those record inserts that Guitar Player magazine would have back in the late 80s. This blew my mind, over and over again as a young guitar player.  Listening to it now, it still gives me goosebumps.  If I remember correctly, it was an ad for the Carvin head.

There's a few but my biggest influence is a guy most people outside of Australia have never heard of, his name is Jimi Hocking.  He was a few years old than me, he played a Les Paul gold top with a ferocity I had never heard before.  I loved going to see his band every week, and it really drove me to pursue playing the guitar and playing in bands.  I own many Les Pauls and still love them. I have a 74 Gold Top that never leaves the studio anymore, that always reminds me of listening to Jimi at ear-splitting volume and loving every note.

I think the best habit I've done lately is to time limit myself.  Rather than burn out on an 8-hour mixing session, only to get ear fatigue, and make moves that I'll just undo later.  Now, I'll say to myself, ok you've got an hour to get, say the vocals done.  Then go do something else if my time is up, like talking to my cats.  Which is the opposite of how a software engineer works, preferring single-minded focus for hours.

The creative side for me comes about in the moment, especially when mixing live.  I've said this to many people, but my favourite time at a gig is the soundcheck.  I'm the most creative at that point, building the mix, troubleshooting problems, interacting with the musicians, and making the PA go boom!

My workflow basically breaks down into 4 parts.  Song Prep, Static Mix, Creative sculpting, faux mastering.  Figuring out that process was really my first breakthrough on being confident about mixing in the studio.

When I receive a song to mix, I'll get all the tracks into Reaper, my DAW of choice at the moment.  Then I'll work through each track setting the gain appropriately.  As I progress through the percussion elements, bass, guitars, keyboards etc to the vocals I'll balance sections.  High pass, Low pass and selection of a console emulation is done here also. There's something magical happens when the song comes to life during that process.  At that point, I will take a break from it for a while, let my ears rest. It's nice to leave it overnight, but sometimes deadlines don't allow that. 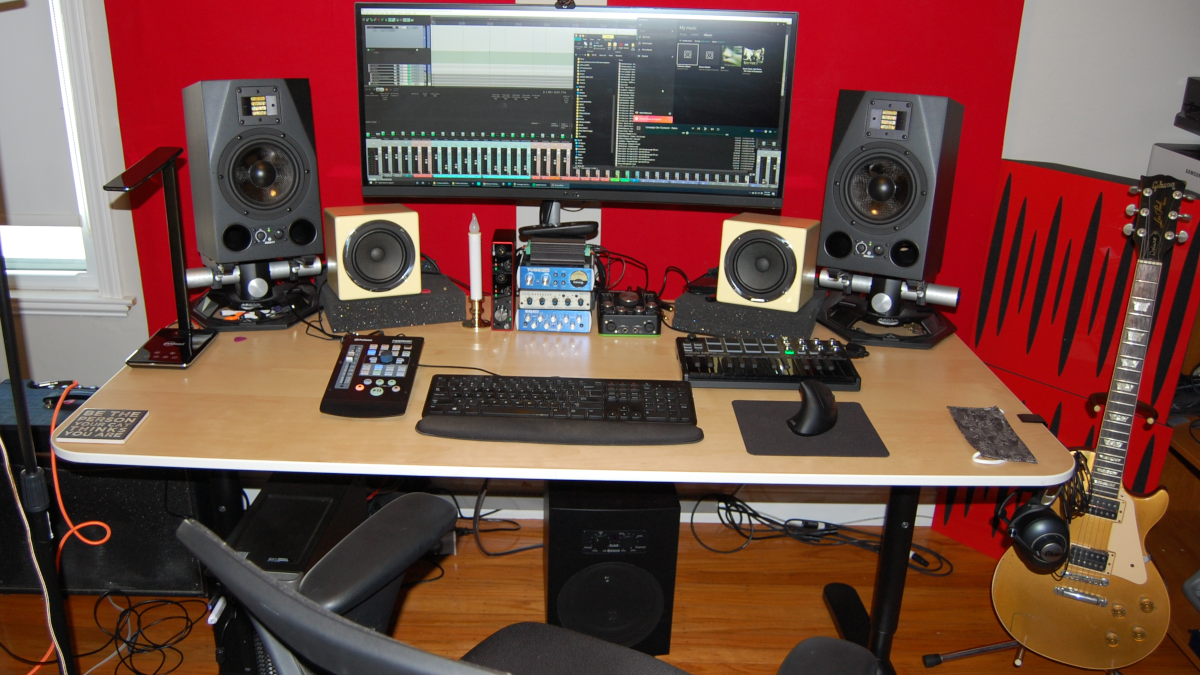 Next, I'll do all the changes to build the sonic landscape of the mix.  This tends to blur between doing EQ, Compressions moves, adding early reflections and space, automation and anything fun that adds spice.  This is a great point to experiment with things.  I let my self bounce around moving fast and building the song space.  I try to break this up into several sessions, depending on my deadline.

Lastly, since most of my mixes have been on Youtube, I'll do a faux mastering to put it at -14 LUFS.  Typically I'll wait to the next day to review and release the song.  The next day fresh ears have saved me a few times now.

Not really habits, I like to make sure I'm in the right frame of mind before I start.  So I'll listen to some music beforehand.  Maybe read an article on mixing.  Before long I'll be fired up and ready to go.  I tend to be that obsessive type who will lock in and focus on one thing until its done.

Definitely my 74 gold top.  It does the metal thing oh so well.

What does the future hold for Mark Milbourne in the music industry?

Hopefully, we all can get back to playing live music really soon.  I deeply miss the performance aspect of mixing a live show.  There's just something magical about pushing up the faders and carving a mix that does justice to the musicians on stage.

Outside of that, I'm going to continue working on mixing songs in my studio.  Eventually turning that into a paying full-time gig.

If you want to follow Mark Milbourne work, you can do so over on his Site and Facebook.