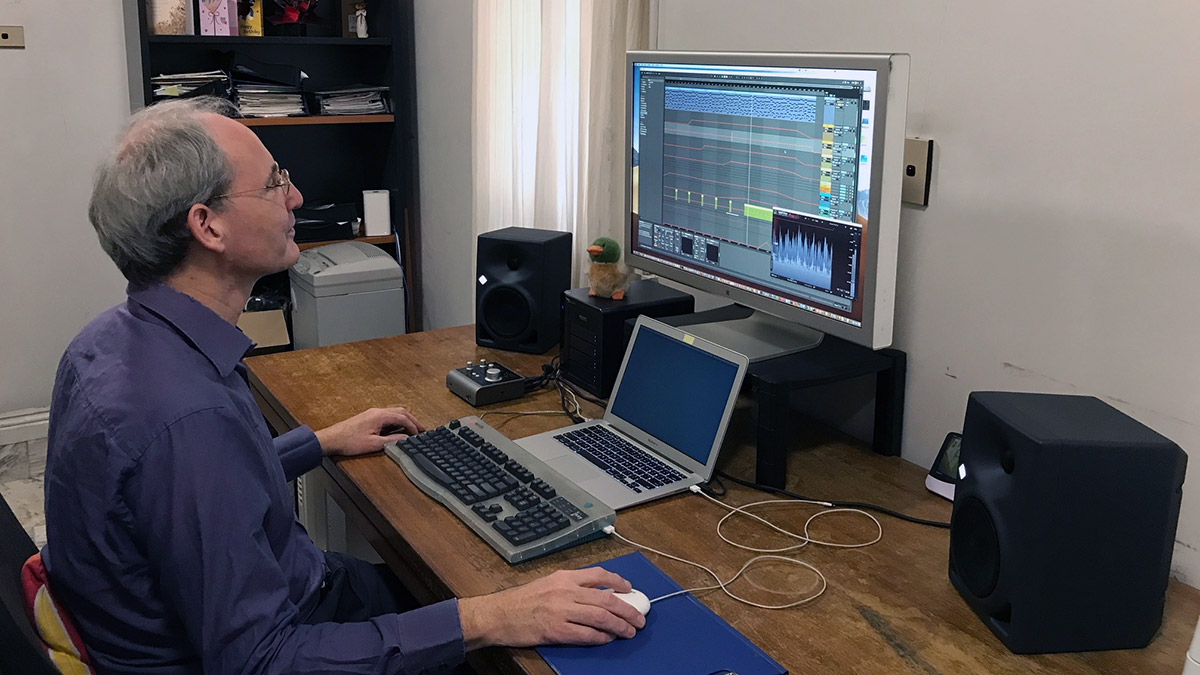 Computer Science expert with a sweet tooth for computer music, influenced by a wide variety of genres from classical to progressive house and with exactly three hundred parachute jumps on his roster, Ross Williams is this month SoundGym Hero!
So how long have you been on SoundGym?
I joined on 24 September 2018, so that's about seven months (to May 2019).
What was your first connection to music?
My parents used to play records of popular and classical music. My mother says that at the age of two, I would sing a song and then go to the record collection and pick out a record, and put it on the turntable, and then place the needle on a particular track, and that would be the song I had been singing. So I was clearly connected to music and music technology at a very early age.
During my school years, I took piano, flute, and violin lessons, but was never particularly good at any of them, reaching only music level grade two. I don't think I had the patience to practice. I am now far more interested because I'm composing my own music rather than performing someone else's.
Did you get a formal Sound/Production education?
No. My education was in Computer Science (1980 to 1989).
However, I was enthusiastic about computer music, and for my Honours Computer Science project in 1983, I created a kind of a DAW in the C programming language on an Exidy Sorcerer Computer (8-bit, Z-80 CPU, 2MHz clock, 56K RAM) where you could enter notes on a staff using keystrokes. The notes were then played by an external synthesizer that a friend had created using wire wrap. I remember that I got it to play a Bach prelude.
I didn't do much music for decades until October 2017 when I discovered masterclass and did the deadmau5 Electronic Music Production Masterclass, That got me enthused, and, after that, there was no stopping me. I did the Armin van Buuren Masterclass and the Hans Zimmer Masterclass
and then, in October 2018, the Hyperbits Masterclass. All of these classes were excellent, and I can recommend them all (for different reasons).
The Hyperbits masterclass is the one that prompted me to actually start, producing my own tracks, and I have been posting a track to SoundCloud every few weeks since then.
Who have been the most significant musical influences for you?
My childhood and youth were soaked in classical music, so that's my foundation: Mozart, Beethoven, Bach, Handel, Debussy, Dvorak, Tchaikovsky, Rachmaninoff, Wagner, Mahler, Elgar. I'd listen to Luciano Pavarotti, Joan Sutherland, and James Galway. My parent's record of the 1943 Horowitz-Toscanini performance of the Tchaikovsky Piano Concerto No.1 was on permanent rotation and ended up with lots of scratches!
On the pop side, Jean-Michel Jarre and Kate Bush have been highly influential to me. I love Michael Nyman's music, particularly Drowning By Numbers, and The Piano. I am mad about the opera Nixon In China by John Adams and Alice Goodman, and iTunes says I have played it 133 times just on my computer.

The soundtrack of the Count Of Monte Cristo by Bruno Coulais has been a big influence. Phillip Glass has been a huge influence, particularly his opera Akhnaten, his violin concerto, and his third symphony. I love the soundtrack to my favourite iOS game "Monument Valley" (Original, and Forgotten Shores) by Stafford Bawler.
But the biggest recent influence has been deadmau5 because his masterclass kicked off my renewed interest in electronic music. I have since soaked myself in deadmau5's music, learning everything I can.
After doing some digging we found that you have a very rich background in Data, can you tell us more?
My Ph.D. in Computer Science was on text data compression. I created one of the highest-compressing algorithms at the time, and my thesis Adaptive Data Compression was published as a book and is still available on Amazon. After that, I created the LZRW series of high-speed text data compression algorithms. I founded a company called Rocksoft that created data integrity and security software.
In 1994, I developed techniques for data deduplication and filed US Patent 5990810 for a data deduplication algorithm that is now widely deployed in the data storage industry (e.g. Quantum, EMC, Riverbed).

Rocksoft was sold to ADIC/Quantum in 2006 for US$62m. I got some of this but lost it by founding another company called Carbon Planet to address the problem of global warming, which is of great concern to me. Carbon Planet did business carbon audits, consumer carbon credit sales, global warming schools education, and forestry carbon credit origination projects. The company peaked in 2010 with about forty staff, but then crashed in the wake of the global financial crisis and changes in Australian Government carbon policy. I am now working on real-time e-commerce software.
Any more achievement you would like to share with us?
I have done three hundred parachute jumps, and am the proud father of two small children.
Do you find your background as a developer help you on your musical journey?
Yes, because it has meant that I am completely unintimidated by the technology.
I am far more intimidated by music theory, which I struggle with.
Have you made music today?
No.
What have you been working on lately?
I set myself a goal of producing one track a week, but that was too much. I've now set a goal of producing one orchestral track and one EDM track each month, and that seems to be working. We'll see if I can sustain that. I'll probably slow down as my production process deepens.
I built my own simple MIDI plugin using the JUCE framework for my own use, and got it working in Ableton. It feels good to know that whatever MIDI functionality I want, I can create.
I'm working on some software to automate arrangement.
Tell us a bit about your workflow at the studio?
I'm still quite new to all this, so I spend most of my music time learning music software, and music theory, and hanging out on SoundGym, and on the Hyperbits Alumni Facebook group.
But once a week, I'll sit down at about 9pm and start actually producing. About half the time I give up at 1am because the track is not working, but the other half of the time the track catches fire and I work on it intensely in a state of flow until 5am when I ship it to SoundCloud and then crawl off to bed. 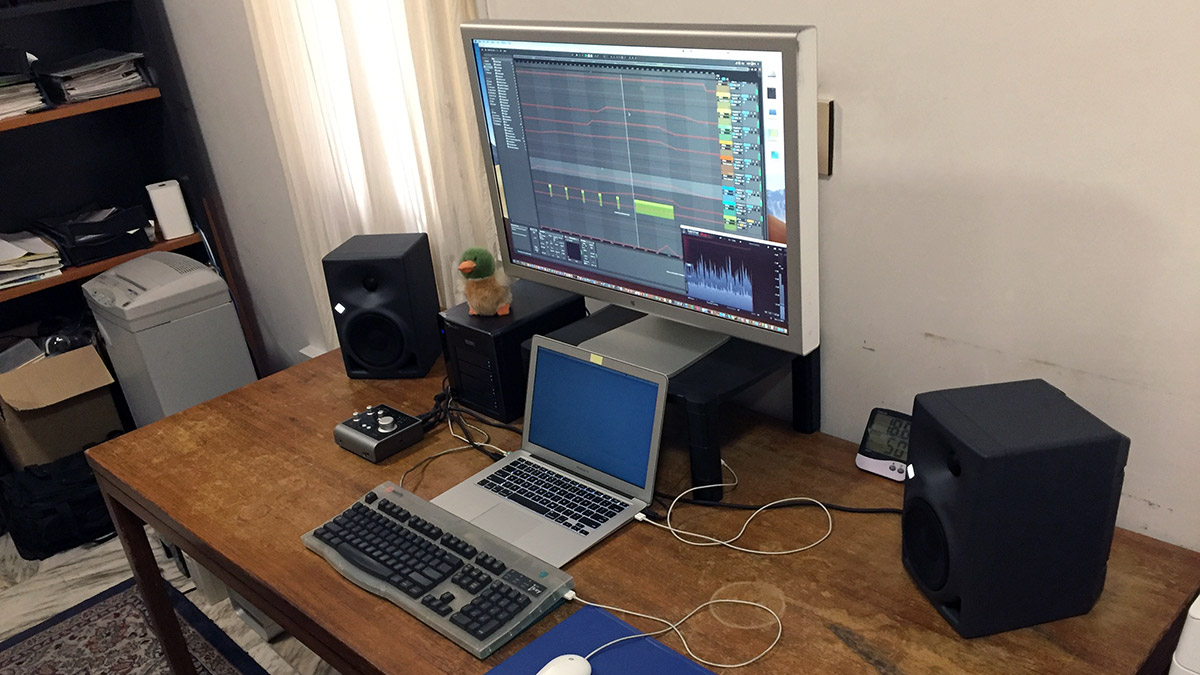 I realize that, while this is a great way to produce music from a creative point of view, it's not great from a production point of view, so I'm in the process of creating a formal production procedure that I will invoke after this creative phase to mix and master properly before I ship.
Any habits you have before starting a session?
I usually start the evening with a SoundGym workout. It's a good warmup!
I assign every project its own serial number, so I allocate a new serial number to each new project before I get started.
What is one of your favorite production techniques?
My favorite production technique is to create a sixteen-bar chord progression using Captain Chords, duplicate it to my desired piece length, then import the MIDI into multiple tracks and arpeggiate it using a different octave and arpeggiation setting for each instrument.

This produces a complex harmonious soundscape for relatively little effort. I then arrange the piece by applying volume automation to every track to make the various instruments arrive and depart.
You can hear an example of this technique in my recent piece The Fairy Queen's Cavalcade. Apart from the cymbals, I didn't write a note of this piece! Every part was automatically generated from my chord progression. As a result, the piece took just eight hours to produce.

One Free plugin that you recommend?
iZotope Vinyl is fun for making a track sound like an old record.
Which three plug-ins you can`t live without?
Captain Chords

The Vienna Symphonic Library (Special Edition Core Bundle)
FabFilter Pro-R
What does the future hold for Ross Williams in the music industry?
This is a hobby for me, so probably not much.
Last question, What is your favorite SoundGym Feature and why?
My favorite SoundGym feature is its founders and designers who really know what they are doing: the user interface is superb. But if pressed for an actual feature, I will say the forums feature, because it has resulted in the creation of a music community that is impressively supportive.