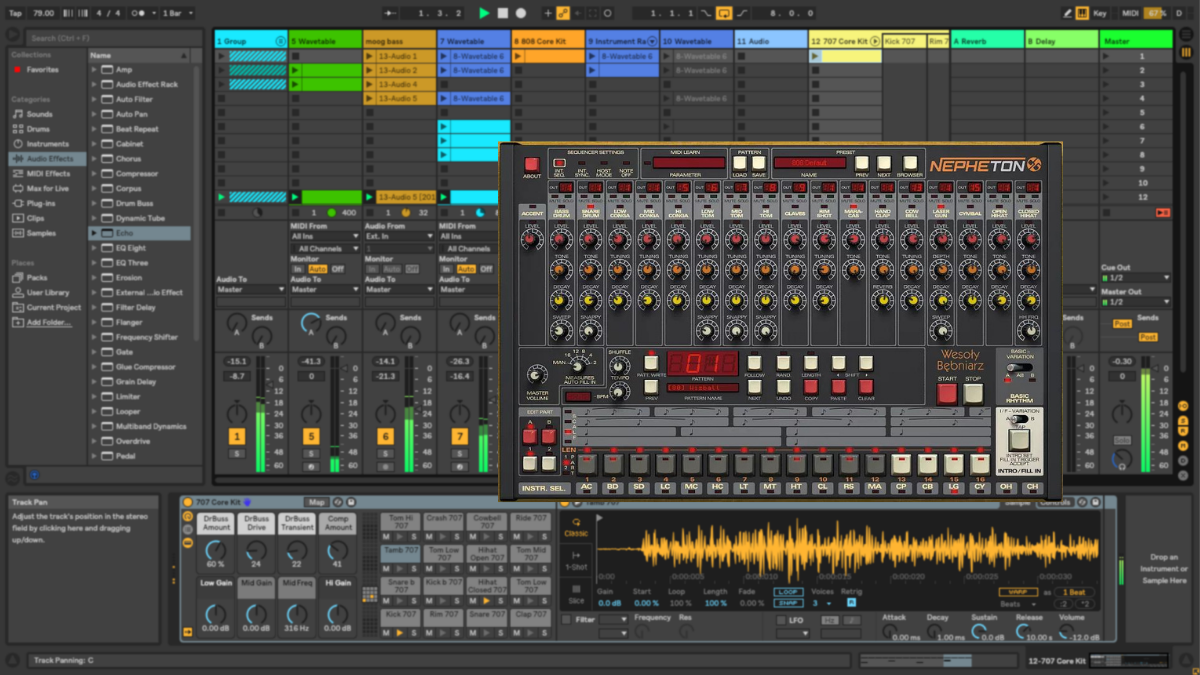 Nepheton is D16's hyper-realistic take on the classic Roland 808 drum machine. As with Drumazon, their 909 emulation, they have extended the functionality of the drum machine with the plugin, while remaining highly focussed on a realistic recreation of the original’s sound.

The Roland TR-808 stands alone as the most legendary drum machine of all time. In production for only two years between 1980 and 1982, it became a cornerstone of both hiphop and house music production and was widely used across a wide range of genres. Roland wanted to create a drum machine with a realistic sound, but at the time using samples would have been too expensive, so they mimicked the sound of drums using analogue synthesis.

As with Drumazon, the key to the success of Nepheton is the way that D16 has gone about recreating that classic 808 sound. The plugin contains 17 fully synthesized modules – one for each drum. This is what really separates Nepheton from other ‘emulations’ that rely on sample playback, or indeed from just using 808 samples from a sample pack. Because each drum sound is being generated from scratch, each is endlessly tweakable in the way it would be if you were using the original box. In fact, many of the drums are more tweakable as D16 have added extra controls in certain places; the kick gains a Sweep knob that allows you to dictate the range of its pitch envelope, a Decay knob is added to the snare – making it easy to control the tightness of the drum. Numerous other drums also benefit from Decay and ‘Snappy’ knobs which increase the overall tweakability of the drum sound.

Nepheton has 12 outputs and each module can be sent to any of these. This allows for a great deal of flexibility in processing; it is easy to set up processing chains for individual drums while continuing to tweak your beats in real-time.

If you are looking for inspiration, there are 96 simple drum patterns and 16 extended patterns included, which you can edit to your heart’s content. Of course, you can also create beats from scratch; either through a recreation of the original 808 interface or via midi inputs.

A very welcome addition to Nepheton, and one that was a key feature of Drumazon, is the randomiser. The great thing about the randomization controls in these plugins is that they are not completely random – D16 creates parameters that you work within, adding some order to the chaos. This is important as the results are almost always very useable in a way that truly random drum beats wouldn’t be. Of course, you can still push things towards the limits if you want some truly surprising results!

Nepheton is available at €99 from D16's online store. Both Mac or PC are supported in both 32 and 64 bit versions. It is compatible with applications that use VST or AU plugins. Although it is not available in AAX format, it can be run in Pro Tools using a virtual patch bay plugin such as Blue Cat's Patchwork.

The good news is we have partnered with D16 to offer their Nepheton as the weekly prize of our BeatRace competition! Test your beat-making skills and battle other members to see who can recreate a drum machine beat in the quickest time. the BeatRace Legend who gets the most points each week will win a copy of Nephaton!

Cuantasvacas
Jan 17
As the youngest member of the ancient BeatRace Winners breed, who, as a prize for that accomplishment, received a nice T-Shirt (yes, I was the last one), I'd like me and my people to have the chance to win one of these neat D16 plugins!!! Set us free!!
3 props