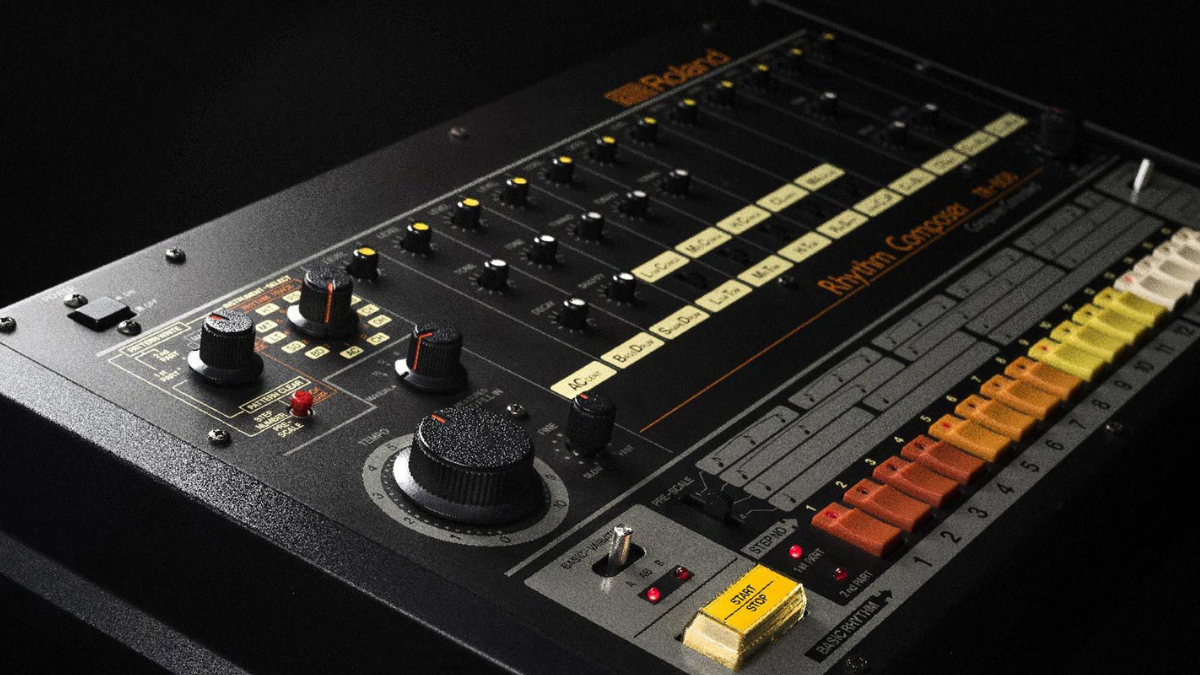 In this article, you can find our seven favorite drum machines of all time. Released between 1980 and 1986, these are all from the golden age of drum machines. We've listed the hardware in chronological order:

The Linn LM-1 Drum Computer was a truly ground-breaking machine; the first ever to use digital samples. The LM-1 used a single chip to store 12 8-bit samples, and it had space to store 100 rhythms in its memory; an incredible number for the time. Priced at nearly $5000, the LM-1 was too expensive to break the mass market (Linn would do this in 1982 with the LinnDrum).

However, the technology was seized upon by professional musicians, and you can hear it on classic records by the likes of Michael Jackson, Prince, Giorgio Moroder, and John Carpenter.

The TR-808 is almost certainly the most iconic drum machine of all time but was originally seen as a failure. It was much cheaper than the LM-1 but used analog technology rather than digital samples. The drum sounds that it created from synth tones and white noise sounded far less realistic than those that came with the LM-1 and professional musicians and reviewers turned their noses up at it. However, the 808 was eventually to find its niche; used by musicians that celebrated its futuristic sound.

The first notable use of the 808 in this context was on Afrika Bambaataa's 'Planet Rock', and soon the sound of this machine became synonymous with hip hop. Not long after that, the early house and techno producers of Chicago and Detroit started using it in their productions, and the 808 has been a staple of electronic dance music ever since.

The Oberheim DMX was another machine that became heavily favoured by hip hop producers. A digital sampler, it was released as a response to the LM-1, but at a much lower price-point. In addition, although it used an 8-bit digital format to store its samples, it made use of an algorithm that increased sample resolution to 12-bit. The DMX was used to notable effect on Run DMC's 'It's Like That' in 1983, and was used by New Order on their classic track 'Blue Monday' that same year.

By 1983, the LinnDrum was on the market for under $3000, and the DMX was selling for a similar price. While cheaper than the LM-1 had been, the prices were still very high, and if someone could create a machine at a lower price point, there was every chance it could be a huge success. Dave Rossum at E-Mu was the engineer that achieved this.

By using chips more economically than other companies, and simplifying the interface, they created a piece of hardware that was less user-friendly than its competitors, and that had shorter sample playback times. However, they were able to ship it for $995, and it went on to shift 10,000 units in two years. Despite the cheaper technology, it sounds great and is still heavily used by many house producers today.

The successor to the 808, the TR-909 added sample-based technology but also kept the analog sounds of its predecessor. It also made use of the emerging Midi technology of the time. Again, the price of the machine is important in terms of its impact on music history. The 909 had a very short shelf life, as, before long, Roland decided that they needed a fully digital drum machine and they launched the TR-707 in 1985. At this point the price of the 909 plummeted, and it was suddenly affordable for emerging producers.

These producers included the likes of Frankie Knuckles in Chicago and Derrick May in Detroit who liked the fact that the kick had a tougher sound than that on the 808, more suited to the clubs where house and techno were emerging. The 909 quickly became a staple sound in both those genres.

At this stage, Roland's signature drum machines were still pretty expensive to the average consumer. However, the company had a division named Boss that was dedicated to producing gear at cheaper prices for the gigging musician. In 1983 they released the DR-110 or Dr. Rhythm. The DR-110 used analog drum sounds, and came with just six sounds; kick, snare, open and closed hats, cymbal, and hand clap. It still packed a real punch, however, and the low price point meant that it was hugely successful. Because so many units were shifted, there are still many of them on the market now, and they are nowhere near as expensive as other vintage Roland gear.

The RX5 added some features to the drum machine that its competitors didn't yet have. It allowed users to adjust the envelope of samples with Attack and Decay controls as well as providing two levels of 'Accent' for each sound. These controls meant that it was possible to significantly change the character of any one of its 24 samples. It was used by a huge number of successful acts including A-ha, INXS and Madonna.

If you are interested in improving your beat-making skills make sure to visit the BeatRace, the place where you can play challenging beat-making games, win real-time beat-making races, and be creative with our unique online drum machine.